His First Day of School 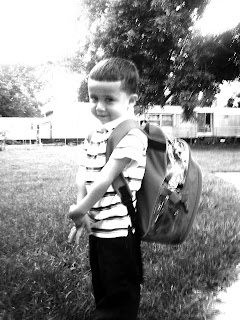 This morning I'm awaken by the sound of his voice, "Which shoes do I wear Mom?". My alarm was still programmed to go off at 6:30am but who needs an alarm when you have a four year old? His been my alarm since January the 28Th of 2005. As I hesitate and give the clock another one of those, "I hate you right now" looks, I walk to the closet and pick his shoes. I'm not sure why he asked me to pick them out for him, he didn't agree with my first pick either way. I had to convince him that brown goes better with his striped shirt instead of the black and white Nike's. It would of
clashed but for a four year old the more colors the better. In there world matching and clashing is just another confusing word to them, its like asking them to spell out Mississippi. After I convinced him we waited for his father to get there. I had spoke to him the night before, he agreed to meet me at my house and we would go on from there. I specifically told him to be at my house by 6:50 because Damian had to be at school by 7:20. Well, we waited for him till 7:10 and he never showed up. I picked up the phone and called his house, his mother told me he was still asleep. I couldn't help it but tears started to fall from my eyes. I tried to be strong but I can't be a rock all the time. Even rocks feel the rain at times. I'm not sure why I even thought his dad would show up. It's one thing that he let me down in the previous years. That was dealt with in August of 2006 and things ended but to let his son down is a different story. I wasn't asking him for money (not that I ever do or accept it), all I asked is for him to be there for the only person that loves him regardless of what goes on around us. The only person that doesn't judge him or question him, the only little person that accepts him for who he is. I know what all of you are thinking, its alright Perla Damian will see all of this on his own. I pray to God that one day he won't. I pray his father will get his act right before Damian starts to notice anything.

On the way to school we stopped to pump gas and he helped me. All he did was push the "87" button but to him that meant everything. We arrived at school and he was very hesitant about the whole thing. He kept saying, "I need to use the restroom at home", that wasn't enough to make us walk back. He and I have gotten this far on our own, and will continue to progress as the years come. We walked trough the hallways and got to his classroom 305. His teacher is very polite. She asked him to put up his backpack in the closet and he obeyed. I filled out a few things and my eyes couldn't help it. I had to get out of there before he saw me cry again. One small problem, my mother had arrived and it was her time to say her good byes to him. She just couldn't let him go. My mother has helped me out these past four years with Damian so in her heart his pretty much hers as well. She's taught him all the morals he has comprehended. I'm sure he'll grow up to be a wonderful gentle man because of all the wisdom she has provided for him over the years. I love her so much. I had to pull her away because Damian was starting to notice that she didn't want to leave his side. As I was holding on to her arm, she asked me if I had given him his school money, she was just finding a way to go back. I looked back one more time, he waived and said " Bye Mom" That's what hit the right spot inside. I looked at him and told him, "Not a good bye baby, its a see ya later, k?" And he just nodded and continued to waive. Mom and I rushed out of there, we both had tears in our eyes. We bumped in to an old friend at school, well two actually. Selene and Carlos. Selene's' daughter, Adriana, is in the same classroom as Damian. Carlos daughter is across the hall. It just shows how fast time flies by. We were all kids when we all met, now were dropping off our children at school. And awaiting the story they have for us when we get home of how there first day of school went. I love my honey bunches of oats, I'm sure he'll have a marvelous story for me tonight. Peace.
- August 24, 2009

Email ThisBlogThis!Share to TwitterShare to FacebookShare to Pinterest
Labels: A Piece of Me, Damian A., Friends, Pictures, School

Wow I see that your little damian started school. Well you use to tell me that he was a smart kid so I know he will do good. Well I see you trying to get into that dental school. I wish you the best of luck in that I really hope your one of the lucky 40. Well perla I hope your doing good. Love your long lost friend(well not that long maybe a little over 2 years lol) have a nice day pumpkin.(calavasa)

There is only one person that calls me calavasa...the one thats with bumble bee. Awwww how did u find my blog???? Hope all is well. Invite me to the wedding long lost friend(well not that long maybe a little over 2 years lol) Blessings Enrique :))

just by clicking around. Call me or text me whenever you get a chance. My number hasn't changed but you probably don't have it. Save it or else. Lol 281-740-7091, have a marvelous day calavasa. P's

Awww, i love it, Perlita.

Yes, time does fly buy... allow your time to be joyful... and it is, i can tell by your touching blog that it is... thank goodness for moms, don't they help a lot? Yes.
Trace

I've managed to find a place of my own, where I can visually see the world I've created in my head. This is years of accumulated quotes, music videos, pictures, & a piece of me in writing.
Writing in a sense that doesn't make sense, but figuratively makes sense to me. Writing that eases my stress and harvests feelings of continual freedom.
Freedom to write about my wonderous thoughts and optimism of this place we call home. Welcome.