With complete honesty, my friend and I had no idea that the South By South West music festival was going on the same weekend as the wedding we were attending. It was all just a huge coincidence, a perfect alignment of the stars and all that voodoo juju crap. Our schedule was set.
Saturday the19th: Head to Austin at 8am, check into the hotel close to 12pm, rest for a few hours, make-up & hair at 2pm, church ceremony at 3:30pm, reception at 5:30, SXSW by 7:30. But we all know things never go as planned! For the most part we followed our schedule, except we stayed at the wedding a little longer and headed out around 9:30pm.

And from 10pm till 11:59pm we waited. For who you may ask? The man his self, Mr. Kanye West! He announced a free private concert 5 days prior to SXSW weekend. There was endless rumors of how anybody was going to get in. And the line from the entrance curved around the street for miles. Vevo announced his performance and you had to send a text message and receive confirmation that you were guaranteed IN at West's SXSW concert. So among us and more than 2,000 West fans we lined up along a curby road and just waited. We were accompanied by kush blowers that smoked joints like cigarettes, hoochie mommas that walked back and front flouting there junk, West lovers with endless Yeezy gear from posters to shirts, and several Vevo confirmed text message receivers. Whom I felt like kicking by the way. And then there was the dreamers. I fit into this list. No text message, No SXSW pass or wrist band, no VIP. All I had to offer was infatuation for the artist.

We waited for an hour and 25 minutes. And I lust Kanye but the chances of getting in were against the odds for my part. So exactly at 11:59pm (when his concert was suppose to begin) I left my spot from the rigid line and we headed into the night. Austin streets were going LIVE. We saw a little bit of everything. And strutting by was phenomenal. From raging crowds in the middle of the streets, bumping to unknown DJ's, the quantity of hands in the air was insane. Then watching the drunks trip over, that's just pure entertainment! We walked through the madness for about 30 minutes and headed out to a quieter scene. Settled into a bar my friend is very fond of, ordered some beers, watched sport re-caps, conversed about the night we just experienced, devoured my veggie burger and onion rings, and then headed back to the hotel around 3am. It was a perfect ending to our unplanned night.

On the way home I couldn't help it. The amount of Bluebonnet's along the road are so enchanting. Even though they barely bgan to blossom, the arrangement of blue patches along the highway are mesmerizing. So I lay down next to them and just felt the suns rays warm up every inch of my body. But only for a few seconds, Bluebonnets happen to be our states flower so any damage to them and my ass could have landed a cold spot in jail, or a very appealing ticket. Overall my weekend was pretty bitchin! I can't wait to do it again next year! 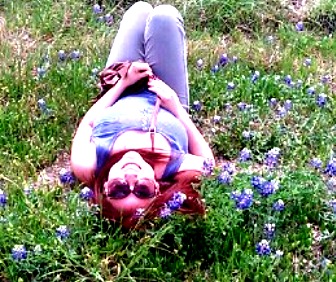 And the line up to Ye's concert was off the fucken wall. John Legend, Kid Cudi, Mos Def, Big Sean, Pusha T, CyHi the Prynce, Mr Hudson, and Fonzworth Bentley took turns sharing the mic and stage with Mr. West, who lead a 3 hour long concert. That started at wee hours of the night. He also had a full marching band on stage playing along to All of the Ligths and back up singers such as Bon Iver and Teyana Taylor. And to Finish up SXSW weekend, he performed several songs with non other than Jay-Z. I almost cried when I watched the youtube videos. At least I tried right??? 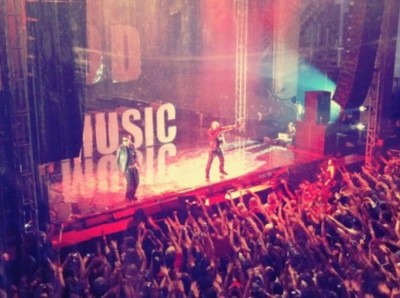