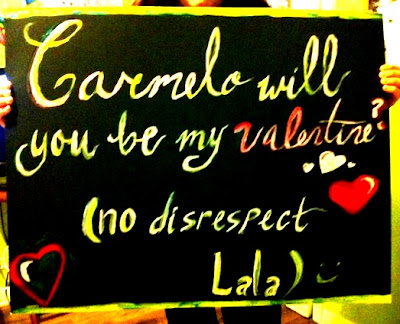 I've had a man crush on Carmelo Anthony for quite some time now. Scratch that. It's more of an obsession. Well last night my home team played against the Nuggets and there was no way in hell I was going to miss this game. As a matter of fact, I've attended most of the Nugget vs Rockets games. Long story short, I made this poster last night, it was mostly out of impact and not well thought out outcomes. My sister didn't think I would actually go through it, NOBODY did. But I'm a brave woman.

The reactions I got from people where a little mind botteling. A few women asked if they could have the sign, ummm flattered but negative! Others just gave me an awkward smile. Some men hissed & shook there heads or made that tsssk tsssk sound. One even told me "Are you serious? A girl like you?" I'm not sure if that was an insult or a compliment. And then the oddest thing was that I was surrounded with Nugget fans. The coinsidence on that behalf was pretty astonoshing. So the Nugget fans always shot up two thumbs up. I felt confident with my sign. Every time the Nuggets play the Rockets, I don't cheer for either team. People you have to understand I'm in linfatuated with Carmelo, not with the Nuggets. Even if he gets traded off to another team, (Lakers or Knicks I hear) you will never catch me rooting to their favor. This is pure love to the man who sports the number #15. I will always rep for my city. Always.

Even though Carmelo didn't say yes to my question, I know he saw it. I was sitting behing him mmmm about 16 rows up. A few of his teammates smiled. What else could I ask for? It was a wonderful Valentine's Day & Evening. Peace.
- February 15, 2011

Email ThisBlogThis!Share to TwitterShare to FacebookShare to Pinterest
Labels: A Piece of Me, Carmelo Anthony, Man Crush, Nuggets, Rockets

It was fantastic girls!