Someone You Miss
Anthony Joseph Stroud 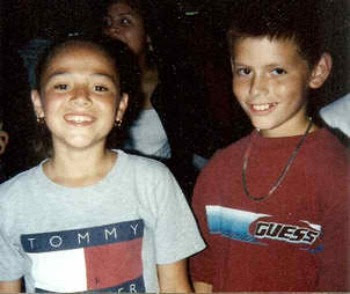 I've never wrote anything about him. I never had the opportunity to do so. So here it goes. . . We we’re buds for as long as I can recall. It was always me, Gema, and Anthony. We ate lunch together, walked to class together, and played in band together. We were such a great trio!

He was the first boy I ever had a real crush on. And when we got to 6th grade we were boyfriend and girlfriend. For Christmas that year, I bought him a CD player. In my mind I thought, "there's no way he could top that off." But he did. He gave me a gold necklace with a Jesus piece on it. It was the perfect gift.

I was so nervous and excited when he placed it around my neck and then it happened . . . he gave me my first kiss. I know we were just children and our minds weren’t in the gutter quite yet, but I felt he was the boy of my life. I felt like he was the ONE.

6th grade ended and we were pretty thrilled about middle school. We talked about our expectations of middle school and all the classes we would or wouldn't take. And we signed our shirts on the last day of school. But he never made it to middle school.

Two days before my birthday (July 1st), Gema called and she told me the most horrifying news. At first I thought it was a prank, a very cruel prank ( I would've preferred that any day) but when I heard her crying on the other side of the phone I knew it was very real and very true.

It didn’t hit me right away and it took days for me to come to terms with it. Anthony and his friend were playing in a car garage, when his friend found a gun, a shotgun to be exact. He assumed it wasn’t loaded, and like most children, he started pointing it around. He pointed it at Anthony, and pulled the trigger. I would never get to hear or see my vivid best friend ever again.

I took it as bad as you can imagine. I didn’t eat or sleep and I even tried to take my own life away. I was a child, that had experienced her first loss. I was expecting him at my house in two days, for my birthday. I was over at his house four days prior to that wretched day.

We played pin ball with all the kids in his neighborhood and hide and seek until the sun went down. And not once did I ever tell him how much I loved him. On the last day of his wake, I put the necklace on his chest, so he could have a little piece of me in heaven. He got buried with it. I miss him greatly.

But God gives me hope, endless amount of it, that one day I'll get to see my friend again. We will greet each other like old times, and we will relive all the memories we created in this world. One sweet day, I will see you again.

In loving memory of Anthony Joseph Stroud. I may not remember every single day, but know that you're still there. And you’ll always be there. For ever and ever.
- May 02, 2011

One Day You guys will meet again!

Very touching indeed. You will see each other again, but for now I'm pretty sure he walks with you daily. Thanks, for sharing..