That Tuesday evening, we had plans to celebrate our third-year anniversary. We decided on the restaurant and made plans to meet at his apartment after my class ended. I have class on Tuesday evenings, therefore setting an exact time was a little tedious. My professor usually dismisses us fifteen minutes early but on this particular evening, she decided to keep us a little later than usual. I sent him a text message letting him know I was still in class and that it was better if we just met at the restaurant. He was a little hesitant but agreed.

When I arrived at the restaurant he was already seated at a table. I walked up to him, kissed him on the lips and sat down next to him. He had already ordered us drinks and I could tell by his body language that he was kinda nervous. He was tapping his right foot uncontrollably and his speech was a little rushed. (I later on found out why, of course.) He asked me about class and then joked around about the restaurant, “I take you to the best places, only the best for my girl.” Truth be told, I got on Yelp and found the restaurant. His only job was to show up. Haha

We ate dinner, talked some more and stared at each other the way we normally do. We asked for the check and that was that. He told me he had to stop by the gas station to fill up (typical stuff he does on our hang out night) and we agreed to meet me at his place. I got to his apartment and I immediately took off my heals, I usually put on my pajamas as soon as I get there but I didn’t do so this time. I was in the restroom when he got there.

I walked out of the rest room and he tells me, “Babe, one of the balcony rails is loose.”

Concerned and a little upset, mostly because our children hang off those rails almost every week,
I walked outside and started tugging on all the rails and nothing. . . they were all perfectly fine. I finally glanced down towards the pool and there it was, in gigantic letters, “MARRY ME?” 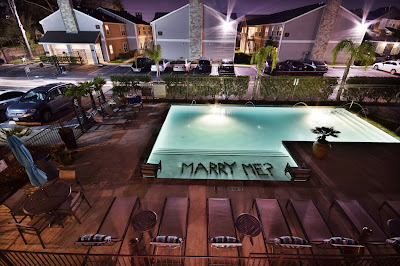 I gasped and when I turned around he was on one knee, holding up a little black box with the most beautiful ring my eyes have ever seen.

“You are amazing Perla and I love you so much. . ." & before he could finish I ran to him and hugged him while he was still kneeling.

"Yes, babe, yes." I replied. Even though he didn't finish asking me.

I sat on his knee and he held me until I was done crying. I then sat on the couch and stared at my ring and then stared at him. (This went on for a good ten minutes.) He later on told me he had this whole speech recited, so meaningful that it made his eyes twinkle a little when he thought about it. But I didn't let him get to it! & now I have to wait till our wedding day to hear it.

He also told me how difficult it was to time everything. He didn’t know what time I was getting out of class, it didn’t help that I unexpectedly asked him to meet me at the restaurant opposed to his place. He had to hide the rocks with pool chairs prior to meeting me at the restaurant and then uncover them after we had dinner so I could see them. But he said it worked out perfectly. And I couldn't agree more, the night of my proposal was everything I've never dreamed of.

To Him: I have never known love like this, nor have I loved another human being in this way. And I honestly don’t believe one lifetime together will ever be enough. I love you with all my heart D.R.T.

Love,
Your Wife To Be

Email ThisBlogThis!Share to TwitterShare to FacebookShare to Pinterest
Labels: Him, Proposal